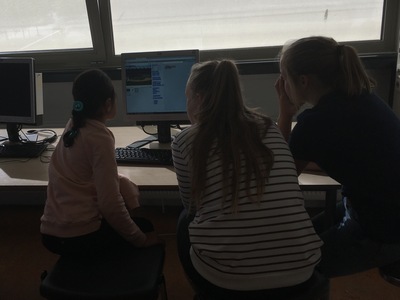 On 13 September, AMS Franeker arranged for a bus to pick up 20 pupils and 2 teachers from a very special primary school. This is a school where children (of all ages) go when they come to live in the Netherlands after leaving their own country for whatever reason. Here, they learn the Dutch language and culture and as soon as possible they are integrated into a regular primary or secondary school. Most of the children are refugees and have endured traumatic events before coming to the Netherlands. We decided to give them a special day to shine!

In preparation for this special day we had our pupils work on a project in which we wanted them to think about what it would have been like to have to flee your home and country, leaving family and possessions behind. How do you get away, where do you go, how do you get there and who will help you when you get there (wherever ‘there’ is). They had to write a storyline and make an animation film using the website scratch.mit.edu.

They idea was for them to become empathetic towards refugees in general. Of course, none of this was discussed with our guests as we didn’t want them to relive their traumatic experiences.

Once our guests arrived, we divided them over our group of pupils and together they did some ‘getting to know each other’ games where they had to interact. Then each guest was coupled our pupils. The assignment was for the guest pupil to think/dream about what her/his life would look like in 10 years. Anything is possible in your dreams. A storyline was developed and after a break, which included a Frisian pastry, our pupils helped our guests make an animation film of these hopes, dreams, wishes, using the Scratch website. Films were made about princesses, star football players and even about a boy returning home to his country because in his dream for the future war had ended there.

We finished the morning with a fantastic lunch catered by all the pupils present. Our guests had even prepared and brought food belonging to their culture.

What a fantastic day this Migrants’ Day was! 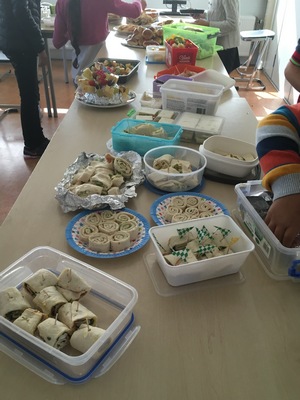